Back in Time: A look back at Leone Stars’ Goal-keeper Mohamed Kamara’s remarkable performance against Algeria in AFCON 2021 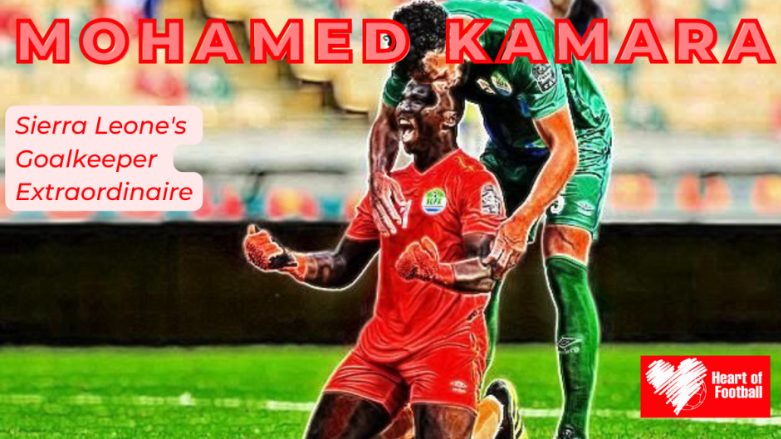 Every now and again in life, a player performs in such a superhuman way that it feels like they are a video game simulation that has been manipulated with a cheat code. Often this level of praise is reserved for the biggest attacking players in football such as Lionel Messi, Kevin De Bruyne, vintage Ronaldinho, even. Tuesday 11 January saw another player hit these heights, though he wasn’t exactly a household name. Step forward, Mohamed Nbalie Kamara.

Kamara is the goalkeeper for Sierra Leone, who had the difficult job of keeping pre-tournament favourites Algeria quiet. The Algeria squad boasted the talent of Islam Slimani, Sofiane Feghouli and of course, Manchester City attacker Riyad Mahrez. The only name of note in the Sierra Leone squad was former Cardiff, QPR and Liverpool centre half Stephen Caulker. It is fair to say that few saw anything but a convincing victory for the Desert Foxes.

If the game was a boxing match, Algeria would have won on points. A cursory glance at the stats would show the North Africans boasted 19 shots (eight on target), to the 10 and one from Sierra Leone. Possession wise, Algeria outmuscled the opponents with 67% and amassed 493 passes, over double what Sierra Leone mustered. Crucially though, this was not a boxing match, and the points were split one apiece.

Football is a team game, of course. Caulker and Bangura ran a tight ship at the back. Alhaji Kamara ran the line well, despite a real lack of service, while the whole team held their discipline well against a technically superior side. We can acknowledge the team, while appreciating that the side walked away from their opener of AFCON 2021 with a point because of their goalkeeper.

It was unconventional at times. He may lack some of the tactical aspects of a peak Gianluigi Buffon, but it is undeniable how strongly he influenced this match. He saved one-on-one from Yacine Brahimi in improbable circumstances. A deep ball caught out the centre halves and he raced to the edge of the box to clear; initially it seemed like he’d lost the plot, leading with his fist, but replays showed that he had, in fact, headed the ball to safety, parrying away the follow up shot with ease. Another instance saw him rush out of his own box to make a goal-saving tackle with his feet.

Kamara’s greatest moment came late in the game. With the pressure on, a corner was fizzed into the Sierra Leone box, and met by an Algerian head. The keeper dropped the gimmicks and the flashy displays, he did what goalkeepers are meant to do… he caught the ball. He caught the ball cleanly and dropped to the ground, clutching it as if it were his own child.

Upon the full time whistle he dropped to his knees in joyful triumph. He had done it, he had kept Algeria at bay, and done so in incredible fashion. He had 48 touches of the ball. Seven saves were made, as well as 19 passes to feet. His clean sheet not only gained a point for his side, he also stopped Algeria from scoring for the first time in 34 matches. Did I mention that he is only 22 years old?

I would love to go into more detail about this thoroughly likeable goalkeeper, but regrettably, I can’t. Unlike the previous players I mentioned at the start, in the ‘cheat code’ mould, there is next to no information easily accessible on the player. His Wikipedia page shows that he had played for FC Johansen and East End Lions in the Sierra Leone football league. It also shows that he has now signed for Red Bull Salzburg, although no credible source verifies this.

This was the first appearance at the Africa Cup of Nations for Sierra Leone since 1996, and despite a lack of real goal threat, they have surely put themselves on the map with this display. We may not know much about this personable and memorable young goalkeeper, but if he can carry on from his form against Algeria into the next game, against a formidable Cote d’Ivoire side, then perhaps we may be seeing the next big player to come from Africa into the forefront of the world.