Back in Time: Millwall vs Sierra Leone to commemorate Abolition 200 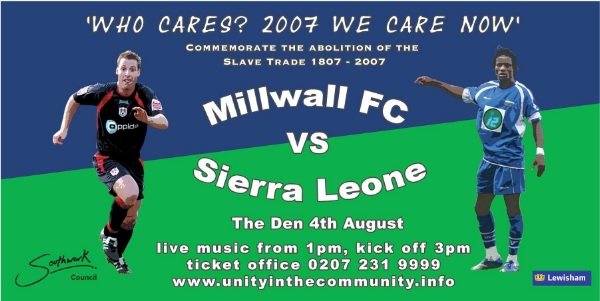 Context: 2007 was an eventful year for Leone Stars, they were invited to the UK on two occasions. Firstly in April to play a friendly against Leyton Orient who they thrashed 4-1 with a coterie of stars including Mohamed Kallon and Kewullay Conteh. Secondly in August for a historical event against Millwall FC as part of the 200th year commemoration of the Abolition of Slavery. Millwall had a reputation as a club with racist issues and to many we were walking into a Lions Den. For Millwall executives this was a chance to improve their image as regards racism. Southwark and Lewisham boroughs, where the stadium is situated, were both committed to making the event as peaceful and enjoyable as possible. This is an excerpt from a circular circulated in both boroughs to promote the nature of the event;

“the Millwall FC vs Sierra Leone game at the Den on Saturday 4 August 2007 to commemorate Abolition 200.

This compliments some excellent work by the Millwall Anti-Racist Trust who have benefited from some strong support from Lord Herman Ouseley former Chair of the Commission for Racial Equality and Asquith Gibbes former Chair of Lewisham Race Equality Council and President of Race Equality Action Lewisham.

I have personally attended the Millwall football matches dedicated to Anti-Racism and kicking racism out of football and can highly recommend this game and others as an excellent family day out.

Please bring to the attention of all young people and families you feel would be interested and would enjoy the event. Millwall also have a Community development programme that you, your family, friends and neighbours may find of interest.”

Leone Stars in spite of difficulties getting some of their best players into the UK on this occasion were able to put out a competitve team that didn’t disappoint. We believe this was the last Leone Stars match the late Alphajor Bah played.

We present you full match coverage below. Enjoy