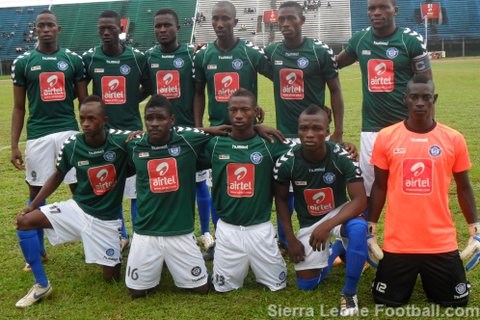 The teams took the decision despite warning from the SLFA led by Isha Johansen that they would take tough actions against clubs, players and coaches who participate in the break away league.

as ‘illegal’ and also stated that plans were on going for the commencement of domestic competitions including the premier league.

The chairman of Gem Stars Victor Lewis told Sierra Leone Football.com that: “We are going to take part in the league because we want to play football,”

He added:”Once we’ve started playing there’ll be no turning back as we’ll not play any league organised by Johansen led executive.”

The Secretary General of Kallon FC, Blamoh Robert, said: “We’ll definitely participate in the league and we’re not worried about the threat from the Johansen led executive.”

“We’ll take part in the league because the management of the Freetown City Council has intructed us to participate,” said Abu Bakarr Kamara,  Chairman of FCFC.

“The players who have made football their career are the losers as they’ve been deprived for so long now. So we need to give them chance to ply their trade.”

“We know it’s the right of the SLFA to organise league but for now we’ve given our consent to play the league being organised by the membership of the SLFA.”

“We’ll not play any other league until the one we have engaged in finishes.”The chairman of Old Edwardians Emmanuel Saffa Abdulai said: “We can no longer wait. We want our players to play football,  they have sat down for too long. The game must play.”

He added: “We are not worried about the threats from the SLFA because we own the association.”

“Those that responsible to organise league are not yet ready. So we can’t continue to wait. We’ll on play the SLFA Premier league after we finish our league which will not last for too long.”

East End Lions chairman Sanusi Bruski said: “We’ll participate in the league as we want the game to play.”

FC Johansen,  Republic of Sierra Leone Armed Forces (RSLAF) and Kambul Eagles of Kenema are the three teams that will not take part in the break away premier league.

The league will kick off at the Siaka Stevens stadium in Freetown on Saturday with Kallon FC locking horns with East End Lions. It’ll end on April 30.

The aggrieved football stakeholders and the Johansen led executive are still at loggerheads over genuine delegates to represent members of the SLFA at congress.

A congress was held in Makeni nine months ago but ended abruptly.