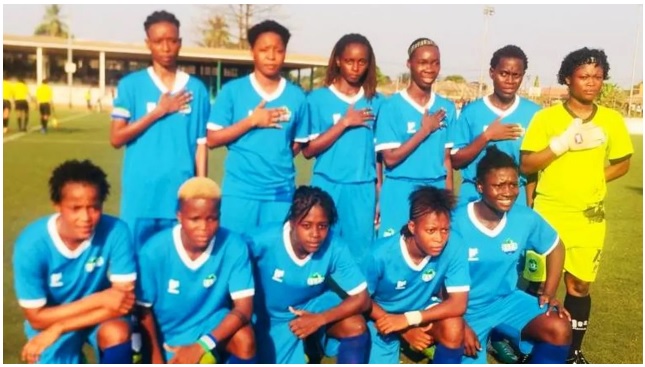 The Government of Sierra Leone through the Ministry of Sports in collaboration with the Sierra Leone Football Association has today honoured all outstanding payment of allowances owed to the Senior National Female players who represented the country in the WAFU Female Tournament hosted in Sierra Leone in February 2020.

Each of the twenty three players received an unprecedented sum of Nineteen Million, Five Hundred and Twenty Four Thousand Leones (Le 19,524,000) which is the exact equivalent of Two Thousand US Dollars ($2,000). The Head Coach and his entire Technical Staff were also beneficiaries of the said payment.

The payment process was conducted by the Accounting Department of the Ministry of Sports headed by Mr. Adonis Kanu under the supervision of the Deputy Minister of Sports Hon. Kai Lawrence Mbayo, the Permanent Secretary Mr. Adikallie Samura and the SLFA General Secretary Mr. Christopher Kamara.

Upon receiving the good news, the Sierra Leone Football Association Boss Madam Isha Johansen, who is presently out of the country on an official assignment, expressed her deepest appreciation to the Government of Sierra Leone, especially the President Brigadier (Rtd) Julius Maada Bio, the Chief Minister Professor David Francis and the Minister of Sports Hon. Ibrahim Nyelenkeh for another clear manifestation of government’s willingness to continue supporting the development of football in Sierra Leone.