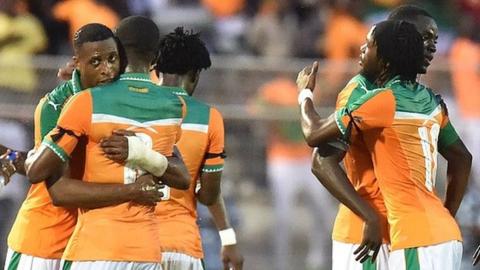 Champions Ivory Coast ensured they will defend their title at next year’s Africa Cup of Nations after drawing 1-1 at home to Sierra Leone.

Needing a point to qualify, an acrobatic goal from Jonathan Kodjia after 37 minutes calmed home nerves.

But after Kei Kamara equalised midway through the second half, the tension was palpable.

Another away goal would have knocked the 2015 Nations Cup winners out but they held on despite a nervy finish.

Salomon Kalou was a surprise starter for the Elephants as he had been expected to miss out following the recent deaths of both his father and aunt.

However, the Hertha Berlin striker was involved in the build-up to the goal as Kodjia, a recent signing for Aston Villa, hooked the ball over the goalkeeper from near the penalty spot.

It was looking good for coach Michel Dussuyer’s side but Sierra Leone had aspirations of a first Nations Cup qualification since 1996 when Kamara, back in the team after ending a self-imposed 10-month exile, drew the visitors level.

Nonetheless, it was the hosts who came closest to the game’s third goal as Serge N’Guessan hit the bar late on, with the final whistle following shortly after.

Elsewhere, Senegal beat Namibia 2-0 to become the only team to qualify with a 100% record for January’s finals in host nation Gabon.

Goals from Diao Balde Keita and a penalty from Famara Diedhiou, either side of a missed spot-kick by Mame Biram Diouf, gave the Teranga Lions a perfect record in Group K.

On Sunday, Niger host Burundi in the group’s final match as both play for pride.