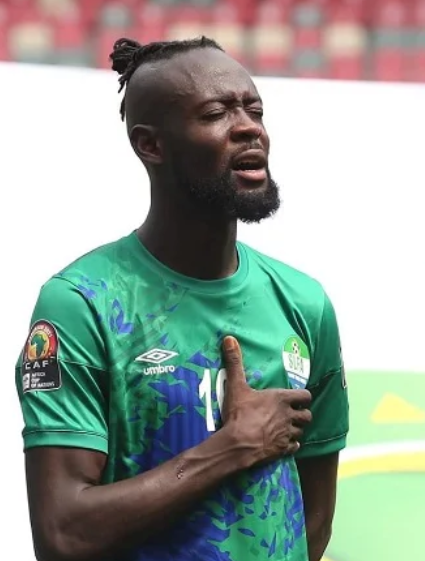 Sierra Leone star striker Kei Ansu Kamara has finally retired from international football after a decade and half with the Leone Stars.

It comes three months after representing Sierra Leone at his first Africa Cup of Nations played in Cameroon.

“Today, I’m finally hanging up my international jersey to focus on my club career,” the 37-year-old Kamara who plays for MLS side CF Montreal said in a statement.

“Fifteen years ago I decided to wear the green, white and blue, and represent you on the international stage. I never knew what the journey would bring me, but I tell you, I would do it all over again if I had the chance.”

“Now when those international breaks come, I will spend the time with my family, but I’ll always miss the games at the Siaka Stevens stadium in Freetown.

“Thank you Sierra Leone for letting your son dream – a dream that’s not only mine, but also one of many Sierra Leone people home and abroad.

“I’ll continue to serve you in any way that I can. I wish Leone Stars all the best and I cannot wait to celebrate you every step of the way.”

The former Norwich and Middlesbrough player made his debut for Sierra Leone in a 2-0 defeat to Equatorial Guinea in Malabo in June 2008 and went on to win 37 caps scoring seven goals.

The goals include his goal against Benin in a decisive qualifier in Conakry last June to help Sierra Leone qualify for the Africa Cup of Nations finals for the first time in 25 years.

But he missed a crucial penalty in their final group match against Equatorial Guinea in Limbe and had he scored the Leone Stars could have gone past the group stage for the first time in their history.

This is the second time the fifth all-time leading goal scorer in MLS has quit international football after doing the same in November 2019, the eve of Sierra Leone-Lesotho 2021 Afcon qualifier in Freetown which ended in a 1-1 draw.

He had earlier taken an international break in October 2015 which lasted for over a year.