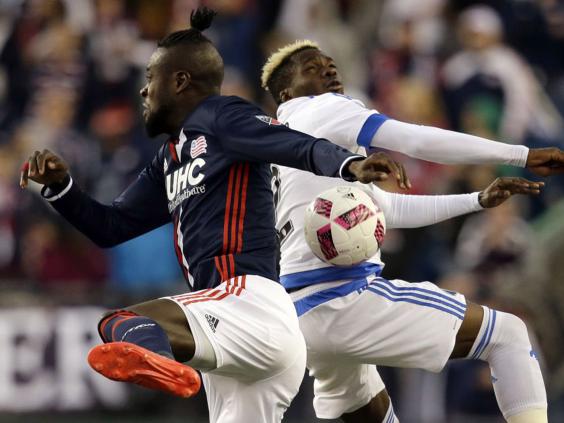 Former Middlesbrough striker Kei Kamara celebrated scoring for MLS side New England Revolution at the weekend for his over-the-top celebration – because he started twerking.

The 32-year-old netted the third in New England’s comfortable 3-0 victory over Montreal Impact and decided to give the fans something to enjoy even though the club missed out on the MLS play-offs.

However, Kamara’s slightly ill-advised celebration saw him twerk – a popular dance move made famous by the likes of Miley Cyrus, Rihanna and Beyonce – which involved Kamara squatting and trusting his hips.

It was something that referee Hilario Grajeda took offence to, and decided to issue a yellow card to Kamara for his efforts. Kamara, who was still delighting in his well taken goal, was incensed.

Under Fifa rules, a referee can book a player if their celebration is deemed excessive, with the regulations adding that a yellow card can be issued when:

In the opinion of the referee, a player makes gestures which are provocative, derisory or inflammatory
A player climbs on to a perimeter fence to celebrate a goal being scored
A player removes their shirt over their head or covers their head with their shirt
Kamara can consider himself lucky though when compared to other sports. Pittsburgh Steelers wide receiver Antonio Brown was hit with a $6,076 fine when he performed a similar celebration on the opening weekend of the NFL season after scoring a touchdown.