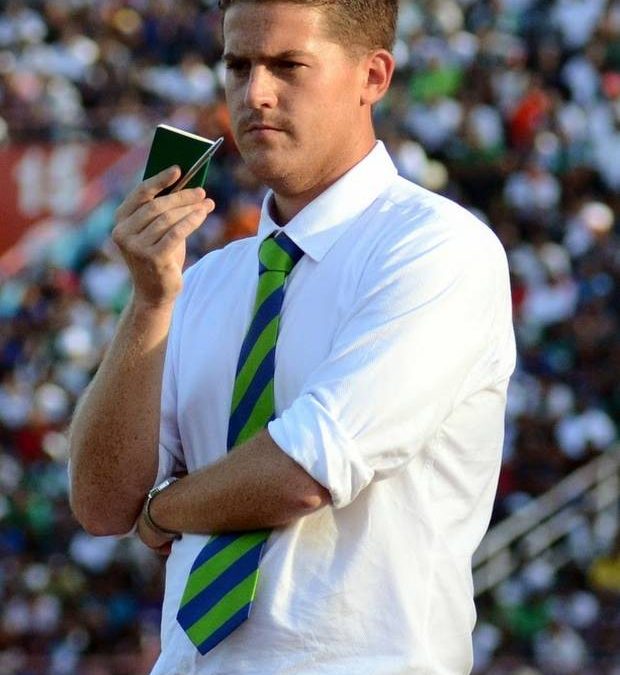 When Sierra Leone’s international team were first introduced to their new first-team coach in April 2013, Johnny McKinstry had a fair idea what the reaction would be.

“I have a pretty good idea what the reaction was,” he reflects

“One look at me, who they didn’t know from Adam. It was quite obvious they were thinking, ‘who is this guy?’ And I can’t blame them.”

McKinstry had moved to Sierra Leone three years earlier, to manage Craig Bellamy’s academy, but most of their senior internationals were playing in Europe and hadn’t a clue who this well-spoken, twenty-something from Lisburn was.

“Mo Bangura was at Celtic, Kei Kamara was at Middlesbrough, we had some guys in Chelsea’s reserves,” he says.

“It was probably just as strange for them as moving to Africa was for me, but thankfully I’d adjusted well enough to have picked up some Creole, which is essentially a pigeon, Victorian English.

“Some players were laughing about something topical, in a meeting room only a few days after we had met for the very first time.

“I just went and chatted, in their language, and I think it had two effects; helping me break the ice about why this funny white guy was now their coach, and also letting them know I could understand them when they talked behind my back!”

Geography and languages may equate as borders and barriers for some, yet McKinstry, now 31-years-old, has spent the past 12 years making friends, connections and history, thousands of miles from his native Northern Ireland.

The Northumbria sports science graduate became the youngest active head coach in world football when he took over the reins at Sierra Leone aged 27, and set a new best for the country when he guided them to 50th in Fifa’s world rankings.

Two years later, he was appointed Rwanda manager, and went on to guide them to the knockout stages of a major tournament – the African Nations Championship – for the first time in their history in January 2016.

Yet in both high-achieving roles, he faced unceremonious ends.

“We had taken Sierra Leone to 50th in the world rankings just as Ebola broke out, meaning we couldn’t play any home games,” he recalls.

“We went to the Ivory Coast, ended up losing 2-1 after being 1-0 up for most of the game, then spent two days travelling to Congo for an away game, which should have been a home fixture for us.

“The journey was supposed to have taken five hours, but took 48, and none of that time was spent in hotels; we slept in airports. We arrived just 18 hours before kick-off, and the players were exhausted.

“Everyone agreed it was the logistics which had killed us off, after we lost 2-0.

“We met with the general secretary of the federation and the minister of sport to discuss the financial side of planning for our next games.

“As I was driving away from the offices, I received my termination letter, which had clearly been written the day before.”

By the time the axe also fell at Rwanda, it had already become clear what kind of coach McKinstry had shaped into.

He wants to leave behind a legacy, everywhere he works.

“I was only in the job for about 18 months, but you still put in plans for three or four years,” he continues.

“I remember my assistant and I had a feeling a game against Ghana would be our last, but they pulled the trigger even before then.

“We had already selected our squad, for this dead rubber game in a campaign we had no hope of qualifying from, and the assistant said to bring out all the pros.

“I wanted the younger players to be given a chance. He said, ‘who cares? You won’t be here to see them develop’.

“But it wasn’t about us, it is always about the players.”

McKinstry had introduced a new level of professionalism to the Sierra Leone set-up, and did likewise in Rwanda, something he learned the importance of while helping to manage New York Red Bulls’ academy system.

“It’s about bringing the new things European clubs have implemented to African nations, such as performance analysts or GPS tracking.

“I couldn’t believe Rwanda had never had a full-time physio when I arrived.

“The life I had in New York, working just five minutes away from Manhattan, was completely different to my time spent in Africa.

“I started in the office at 2pm, coached from 5-9pm and then went out nearly every night to test the city which doesn’t sleep.”

Perhaps this is one of the greatest testaments to McKinstry’s commitment to a cause.

He accepted the chance to coach at Craig Bellamy’s academy in Sierra Leone, a job which would probably carry all kinds of additional headaches, such as administration, fighting for resources, and all on top of moving to one of the most dangerous countries in the world.

“The difference with an African academy, to an English one for instance, is the players don’t want to succeed, they need to,” he says.

“They were playing without shoes, on hard, stoney surfaces, and never had any kit.

“Their hopes of better lives come from academies.

“I think I put my mum through all kinds of stress when I told her I was taking a job there!

“She got used to it pretty quickly, though. My dad is into motorsport but at the time, my mum didn’t like football at all. Now she watches Newcastle United, the club I’ve supported for years, probably more than I do.

“My girlfriend, Anne-Marie, is a really big football fan. She’s now doing her consultancy training as a doctor, but will watch football in the house to relax. I don’t like having it on, I prefer a defined line between work and my social life.”

McKinstry refuses, however, to fall into the all-too comfortable existence of an out-of-work manager.

He’s just returned from visiting clubs in Spain to make contacts, and is hoping to meet with Northern Ireland boss Michael O’Neill for the first time this week as the team meet up ahead of their next World Cup qualifier against Azerbaijan – who are currently three points ahead of them in second place in Group C in the battle to qualify for Russia 2018 – at Windsor Park on Friday night.

“I don’t know what will happen next for me,” he adds.

“Football is hard to predict; something could easily come out of the blue. I try not to plan for anything too far in advance.

“I’ve spoken with clubs in Scotland and was over with Alan Pardew at Crystal Palace to learn from him.

“Even when you are not in a job, you are always working because you just have to keep learning.”