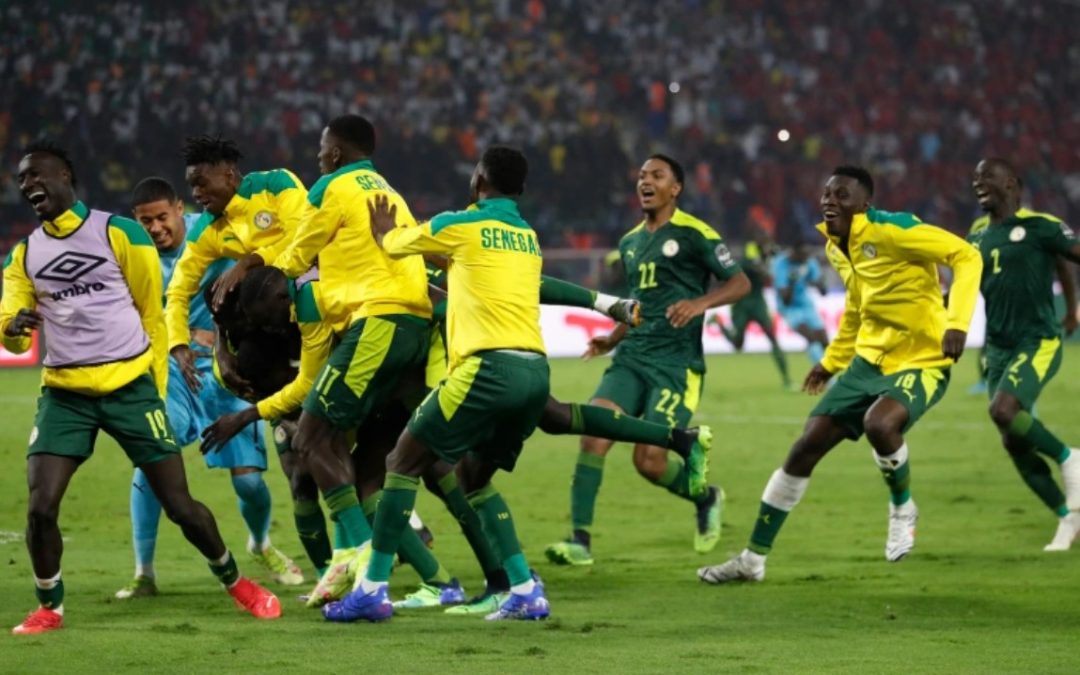 By Mohamed Fajah Barrie in Yaounde

Senegal have won the Africa cup of Nations for the first time after defeating Egypt 4-2 on penalties at the Olembe stadium in Yaoundé on Sunday.

It finished goalless at both regular and extra time in a match dubbed as the battle between Liverpool’s two main African stars Sadio Mane of Senegal and Egypt skipper Mohamed Salah.

Former African player of Mane netted the winning spot-kick after Egypt, the seven times champions had missed two penalties, one hitting the post, and the other blocked by Chelsea goalkeeper Edouard Mendy.

The Teranga Lions dominated the match and should have won the match at regular time as they failed to convert an early penalty.

Egypt defender Abdelmonem fouled Saliou Cisse in the box and the player of the tournament Mane took the penalty.

He saw his effort saved by the impressive Egyptian goalie Gabaski who further made several saves.

The Pharaoh’s star player Mohamed Salah was well marshalled but forced the Chelsea Senegalese goalie Mendy to make two saves in the first half.

The second half also produced no goals as record seven times champions Egypt looking to break up play in so many occasions.

Extra time was required which also ended goalless after Senegalese substitute Dieng was denied thrice from scoring before Mendy, the best goalkeeper of the tournament tipped over the crossbar an attempt from Marwan Hamdy.

Mane had the decisive word on the shoot-out after Mendy had blocked Mohanad Lasheen’s penalty and Mohamed Abdelmonem had hit the post.

The Liverpool forward hit the ball with power beating Gabaski despite guessing the right way to end Senegal’s long wait of winning the Africa Cup of Nations trophy.

It’s redemption for The Teranga Lions coach Aliou Cisse who as a player missed a crucial penalty in the final twenty years ago losing to Cameroon in Bamako, and was coach of the Senegalese team that lost 1-0 to Algeria in the final three years ago in Cairo.