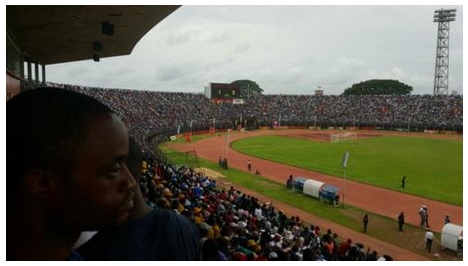 Fans and players in Sierra Leone are turning to non-league community football rather than domestic competitions organised by the country’s football association.

The Sierra Leone Football Association (SLFA) is not currently organising a domestic league however it is running an FA Cup that only a handful fans watched over the weekend, despite entry being free.

Just a week earlier the biggest crowd for a domestic in more than 20 years saw Mountain City beat Fullah Town 1-0 in the non-league final at the Siaka Stevens stadium in Freetown.

Indeed the match attracted more fans than some of Sierra Leone’s recent international matches in Freetown.

Even a breakaway league organised by 11 out of 14 premier league clubs that ended a few months ago failed to attract large crowds in Freetown.

The majority of players from Freetown’s 11 top-flight clubs played in the community league including several internationals among them goalkeeper Unisa Koroma for Mountain City.

The duo are usually assistant coach and head coach respectively at Kallon FC.

Replica shirts of the two finalists were sold out and the SLFA provided Fifa-standard referees for the final to show their support for the competition.

“This is a big slap in the face to the SLFA and its members in Freetown as Cofa has succeeded where we have failed,” Roberts told BBC Sport.

“The SLFA and Wafa has brought football to standstill in the western area because of pride and ego.

“This is as a result of the impasse within the SLFA. This should teach us that we must play football no matter the situation.

“The SLFA should not be learning from Cofa, it should be the other way round.”

The head of competitions of the SLFA Sorie Ibrahim Sesay disagrees that it reflects badly on them but admits that their FA Cup is struggling to attract crowds in Freetown.

“It’s a fact the Cofa final attracted a big crowd but it’s not a slap against us because we’re organising the FA Cup despite the challenges we are facing,” Sesay told BBC Sport.

“One of the challenges is that the ongoing national FA Cup is struggling to draw crowds in Freetown and it’s because of infighting within the football family.

“Sierra Leoneans like football and I believe if we stop fighting and unite as a family we’ll organise better domestic competitions and crowds will return to watch our matches.”

The problems within Sierra Leone football and the recent Ebola outbreak means that there has been just one league season and two FA Cups since 2013.

The ongoing FA Cup has reached the last 32 but is being played without six premier league clubs.

The missing teams were also part of the 11 sides that took part in a breakaway league earlier this year and had vowed not to play in any competition organised by the current SLFA administration.

It is still not clear whether two other premier clubs, Freetown City FC and Mighty Blackpool, will take part in the current FA Cup.