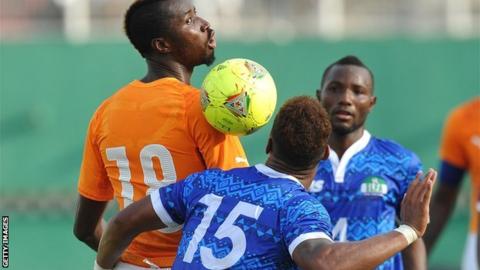 Sierra Leone will go ahead with their friendly match with Malawi after the Sierra Leone Football Association (SLFA) secured a venue.

Leone Stars will face the Flames at the Siaka Stevens stadium, Freetown, on 22 March, their first match at home since they hosted Seychelles in July 2014.

The match was almost cancelled over a $10,000 fee demanded by the now sacked country’s sports minister Paul Kamara.

SLFA told BBC Sport: “We will not pay any cash for the use of the stadium.”

This will be the third friendly meetings between Leone Stars and the Flames with the latter winning the previous two encounters at home in Lilongwe way back in 1978.

There has never been a competitive fixture between the two teams.

The match is Sierra Leone’s preparation for the 2017 Africa Cup of Nations qualifiers against Gabon – away on 25 March and at home in Freetown three days later.

However, there are no points at stake for the two games because Gabon will host the finals in January.

Sierra Leone are currently bottom of group I behind Sudan and African champions Ivory Coast.

But Malawi are preparing for a competitive Nations Cup double-header with Guinea in Group L.

The Flames are presently third in the table, above Guinea but below Swaziland and Zimbabwe.