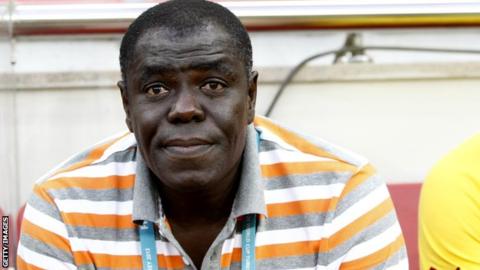 Ghanaian Sellas Tetteh is to continue as caretaker coach of Sierra Leone after his loan agreement was extended.

He will take charge of Sierra Leone’s upcoming matches against Gabon.

The games are on the 2017 Africa Cup of Nations qualifying schedule but no points are on offer as Gabon are hosting January’s finals.

“After the Gabon matches we will decide whether to make it permanent or not,” Abu Bakarr Kamara, of the Sierra Leone Football Association, told BBC Sport.

The Ghana Football Association have replaced Tetteh as coach of their under-20 side with the appointment of Mas-Ud Didi Dramani.

Tetteh, who has previously coached Black Stars and Rwanda, was initially loaned to Sierra Leone for three months after the search for permanent coach was put on hold by the football association.

That initial loan expired last October after Leone Stars were eliminated in the 2018 World Cup qualifiers by Chad.

Coach Tetteh, who rose to prominence when he won the 2009 Under-20 World Cup with Ghana, was in charge of Leone Stars’ last three games.

As well as the overall loss to Chad he also managed a draw with African champions Ivory Coast in a 2017 Nations Cup qualifier.

The matches upcoming matches against Gabon will be played in Franceville on 25 March, and in Freetown three days later.

The tie on 28 March will be the first time the Leone Stars have played on home soil since they hosted Seychelles in Freetown in a 2015 Nations Cup qualifier 20 months ago.

Sierra Leone together with their neighbours Guinea and Liberia were banned by the Confederation of African Football from hosting international matches because of the outbreak of Ebola.

All three countries have now been cleared to host matches.