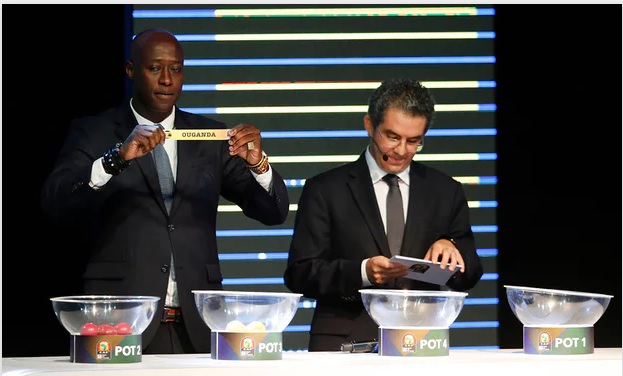 Ivory Coast will face former coach Herve Renard again after being drawn against Morocco in the group stage of the 2017 Africa Cup of Nations.

Renard led the Ivorians to the 2015 title but will stand in their way in Gabon – just as he also faces them in a 2018 World Cup qualifying group.

Egypt, Ghana and Uganda have also been drawn together for the Nations Cup as well as a World Cup qualifying group.

Gabon kick off the tournament on 14 January, with the final on 5 February.

The hosts appear to have been fortunate in the draw, pitched in Group A alongside debutants Guinea-Bissau, Cameroon and Burkina Faso.

And they could also be buoyed by newly elected Prime Minister Emmanuel Issoze-Ngondet’s insistence that the country is in good shape to put on the 31st edition of the finals.

Speaking at Wednesday’s draw in Libreville Issoze-Ngondet dismissed speculation that recent political instability in Gabon could force the Confederation of African Football to relocate the tournament.

“We will not back away from the tournament. We are ready and we will organize an exceptional tournament,” he said.

Gabon, who co-hosted the event with Equatorial Guinea in 2012, will need strong support within their country both on and off the field if they are to progress to the latter stages.

Morocco coach Renard is aiming for a hat-trick of success, having also won the Nations Cup with Zambia in 2012. He will know the Ivorians well, although the so-called ‘golden generation’ of players he guided to glory in Equatorial Guinea will not be present in Gabon.

Long-time talisman Yaya Toure has retired from internationals, along with brother Kolo.

But forward Gervinho is still a key part of the team and he will lead the new generation that includes Manchester United defender Eric Bailly and Paris St Germain full-back Serge Aurier.

Egypt, Ghana and Uganda will also soon be tired of the sight of each other having been drawn together in Group D only four months after they were placed in the same group for 2018 World Cup qualifying.

Seven-time African champions Egypt will be eager to revive their dominance after some years of under-performing, while Ghana are desperate to win their first title since 1982 and go one better than the runners-up spot they achieved last time out and in 2012 and 1992.

Uganda’s last appearance at the tournament was in 1978, when they lost in the final to Ghana.

Group B pits together fierce north African rivals Algeria, the second highest ranked team on the continent, and Tunisia.

And with Senegal, the third highest ranked team in Africa, also in the group, there are some very tough encounters expected.

The line-up for next year’s finals is very strong, with eight previous winners and only Zimbabwe having failed to reach the quarter-finals in previous appearances.