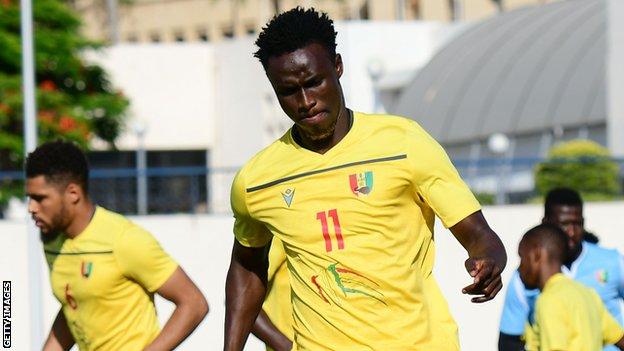 Guinea’s Idrissa Sylla has played in England, Belgium and France

African football stories in short for August including some of the transfers as new seasons begin around the world.

Former Roma midfielder Ricardo Faty has extended his contract with Turkish club Ankaragucu for another season.

The Senegal international joined the Ankara-based club from another Turkish side Bursaspor a year ago and made 19 appearances last season scoring three goals.

The 33-year France born player had stints in French Ligue 1 for Nantes, Strasbourg and Ajaccio.

He has also featured in the German Bundesliga for Bayern Leverkusen as well as Roma in the Italian Serie A.

Faty represented the French Under-21s before he committed his international future to Senegal who he has played for three times since 2012.

The 28-year old forward has now joined his third Belgian club, having previously had a stint with Anderlecht.

Sylla netted a total of three goals in 18 appearances for Zulte-Waregem across all competitions.

He was part of Guinea’s squad at the recent Africa Cup of Nations but didn’t play a single match for Syli Nationale in Egypt.

Sierra Leone have begun training for their 2022 World Cup preliminary round qualifier against neighbours Liberia despite being without a coach.

The Sierra Leone Football Association (SLFA) technical director John Jebbor Sherington is in charge of training 51 local based players invited by his department until a new head coach for is appointed.

The SLFA said in a statement that the recruitment process of a coach is ongoing and the announcement is expected this week.

The match in Monrovia will mark the return of Sierra Leone to international football after their suspension was lifted by Fifa two months ago.

Liberia will host the first leg in Monrovia on 4 September while Sierra Leone will host the return leg the following week in Freetown.

German club Fortuna Düsseldorf have signed Ghanaian youngster Kelvin Ofori from the Right to Dream Academy on a deal until 2022.

The 18-year-old forward joins compatriots Bernard Tekpetey and Nana Ampomah at the club.

The club’s Sporting Director, Lutz Pfannenstiel, is delighted that they have snapped up a promising talent.

“Kelvin Ofori is a great talent in Ghana and we are very happy that he has chosen Fortuna,” Pfannenstiel told the club website.

“He has a great technique and his pace makes him hard to defend. We are convinced that he can develop as best as possible with us.”

Senegal midfielder Sidy Sarr has signed for French Ligue 1 club Nimes from Ligue 2 side Chateauroux on a four-year deal.

The 23-year-old, who also spent time on loan Lorient, joins for an undisclosed fee and could make his debut for his new club against French champions Paris Saint Germain on Sunday.

He played twice for Senegal as they qualified for the Africa Cup of Nations but was not in the final squad in Egypt.

Gabon defender Yrondu Musavu-King has joined French Ligue 2 side Le Mans from Boulogne, who are in the tier below.

The details of the 27-year-old’s contract have not been made public.

He has 13 caps for Gabon and has had stints with French sides Lorient and Toulouse as well as at Swiss club St Gallen.

The 20-year-old, who joined the Estonian club from Gambia’s Real de Banjul, has scored 13 times in 17 appearances this season.

“I am very happy to be here and am excited to get started here in Viborg. It’s a big challenge for me, but I love challenges,” the lanky forward said.

The 24-year-old played in two of Mali’s qualifiers for the Africa Cup of Nations but was not included in their squad for the finals in Egypt.

Tunisia international Yoann Touzghar has extended his contact with French club Troyes until 2022.

The 32-year old forward made 34 league appearances last season and has already featured twice this season in Ligue 2.

France-born Touzghar committed his international future to Tunisia and has made five appearances for the Carthage Eagles, but was not part of the Africa Cup of Nations squad last month.

Egyptian side Tanta have confirmed the acquisition of Kenya international John Avire on a permanent deal.

The top-flight side have not disclosed the details of the deal for the forward, who joins from Kenyan club Sofapaka.

The 22-year old featured in two of Kenya’s matches at the recent Africa Cup of Nations in Egypt.

His performance attracted interest from several European clubs but he has joined Gil Vicente on initial loan with an option for a permanent switch.

Naidji’s lone appearance for the Desert Foxes came as a substitute in the 1-1 home draw with The Gambia in a 2019 Africa Cup of Nations qualifier back in March.

It will be the 27-year-old striker’s first stint outside of Libya having played for Khaleej Sirte before Al Ahli.

Taher played in all five of Libya’s matches as they finished fourth at the 2018 African Nations Championship or CHAN in Morocco.

Tunisian side CS Faxien have taken Amr Gamal on a season-long loan from Egypt’s Al Ahly, with an option to buy the striker.

It is a third loan spell for the 27-year-old, who missed out on the Africa Cup of Nations on home soil, after stints with South Africa’s Bidvest Wits and HJK Helsinki in Finland.

Sanneh made 19 appearances last season and scored his only goal for the club in the derby win over Standard Liège.

The former Real de Banjul captain has 12 caps for the Scorpions at international level.

The 21-year-old midfielder spent last season for another Algerian side Tadjananet, who were relegated to the second tier.

He moved to Algeria in 2017 after a stint with Latvian side Liepaja.

Dellahi played every minute of Mauritania’s three matches at the recent Africa Cup of Nations in Egypt.

Egyptian side Al Ittihad of Alexandria have announced the signing of Uganda international player Emmanuel Okwi from Tanzanian club Simba.

“The club board signed a very good talent, who was one of the best players in Uganda’s national team at the Africa Cup of Nations, the player put a pen to in a two years deal on Thursday.” Al Ittihad said in a statement.

Al Ittihad coach Tallat Yousef also praised the deal: “He is a very good player and will be a great support to our attack in the next season.”

It brings an end to his third stint at Simba, he has also played for Uganda’s SC Villa, Danish side SonderjyskE, Tanzania’s Young Africans and Etoile du Sahel in Tunisia.

Morocco international Faycal Fajr has returned to La liga club Getafe on a two-year deal after a season at French club Caen.

“Getafe CF and SM Caen have reached an agreement for the transfer of the player, Faycal Fajr,” Getafe said in a statement on their website.

Fajr featured in two of Morocco’s matches at the recent Africa Cup of Nations in Egypt, where they were knocked out in the last 16 stage by Benin.

He has made 33 appearances in a for the Atlas Lions.

Burkina Faso international goalkeeper Herve Koffi on loan, until the end of the season.

The 22-year-old has only featured six times for the first team at Lille since joining them in 2017 and moves to Portugal in search of more experience.

The other player on the move is Togo defender Hakim Ouro-Sama, 21, he has seven international caps but is yet to play a professional game for Lille.

Egyptian side Pyramids have announced the signing of Uganda’s Lumala Abdu from Swedish side Kalmar FF.

The 22-year-old had been in Cairo since Friday negotiating with the club before finalising the deal on Wednesday.

Abdu was part of the Uganda squad that reached the last 16 of the recent Africa Cup of Nations in Egypt.

He will join forces once again with coach Sebastien Desabre, who he worked under when the Frenchman was in charge of Uganda.

The 28-year-old midfielder has been playing in Algeria since 2011, featuring for several clubs including two-time African champions Entente Setif.

He helped Madagascar to reach the he quarter-finals of the recent Africa Nations Cup in Egypt, having played in all five of the Barea’s games at the tournament.

Amada scored in the 2-2 draw against DR Congo in the last 16 and also converted one of the post-match penalties that saw Madagascar progress to the last eight.