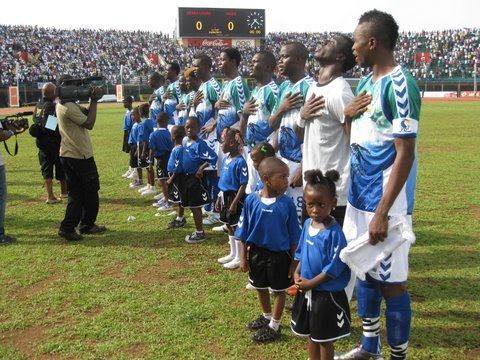 A goal by Sweden based Ibrahim Teteh Bangura in the second half gave Sierra Leone a 1-0 victory over Niger in a 2012 African Cup of Nations qualifying group G match at the National Stadium in Freetown on Saturday.

Leone Stars completely dominated the match particularly in the second half when they wasted quite a good number of clear chances.

With the exception of a shot from striker Kamilou Doula that went over the cross in the first half and few other moves in the second half, Menas of Niger never threatened the Leone Stars goalie Christian Caulker.

Sweden-based Leone Stars striker Mohamed Bangura alias Poborsky was the first to come close to scoring mid way in the first half as his right-footed shot just outside the box went over the cross bar.

A minute later Poborsky’s club mate Ibrahim Bangura too missed a clear chance when he failed to convert a rebound in the box.

Leone Stars continued to press for a goal and finally succeeded two minutes after the interval when Ibrahim Bangura headed home from the six-yard box a throw from the right wing by defender David Simbo to send the crowd at the stadium and the Leone Stars bench to ecstasy.  It was Bangura’s first international goal in his career.

Bangura should have got at least two more goals as he shot wide twice in the box after receiving through passes from USA based Kei Kamara and Poborsky who too missed another scoring opportunity in the second half.

After conceding the goal, Niger raised their game and even made some moves. They should have scored from a scramble in the penalty area and that was their only chance in the second half.

The victory marks Leone Stars first in the 2012 qualifiers and also the first in almost three years. Leone Stars last victory was against Equatorial Guinea 2-1 in Freetown in the 2010 World Cup and African Cup of Nations qualifiers. Kewullay Conteh and Sheriff Suma the goal scorers.

Leone Stars now have five points but still remain third in the group ahead of Egypt who are hosting the leaders South Africa at the Cairo International stadium on Sunday. A win for Egypt will send the group wide open.

Niger remain second in the group despite the defeat as they have six points.

Other results of matches played on Saturday

This article was first published in Sierra Leone Football.com in 2011