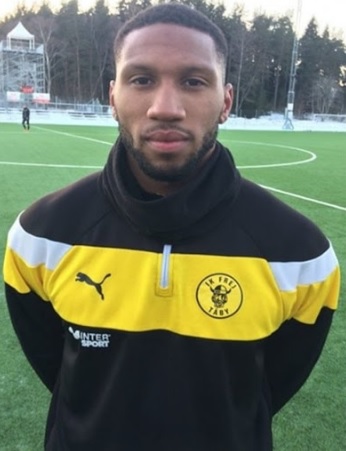 The 21-year old defender made the move last January before Leicester City were crowned English champions.

“It was a move i needed to make for my career,” Sesay who only played for the Leicester youth team told Sierra Leone Football.com.

He was unable to make it to the Leicester’s senior team since joining the English champions in the 2010/2011 season.

Sesay added: “I made the move to seek first team football and to gain exposure.” “The chances of me to be in the Leicester first team were very slim because of how well the team were doing in the Premier League.”

“That was why I took the chance when it came to leave the club to go to Barnet.” “I’m happy for Leicester for winning the Premier League and I think they 100% deserved it.”

Sesay who is a product of Arsenal academy is happy at Barnet FC and is aiming to play in one of the big leagues in Europe.

“I’m happy at Barnet as  I’ve played 13 games upon arrival last season and I hope to play regularly next season.” “I knew I would play first team football in Barnet that was why I joined the club.” “This is a stepping stone for better things to come. My aim is to play in one of the bigger leagues in Europe.”

During his spell with Leicester, Sesay was twice loaned out to League one side Colchester in 2014 making only three appearances, and in 2015 to League two outfit Cambridge United where he played six games before he was sold to Barnet FC.

Sesay was born in England but is of Sierra Leonean heritage.

He has so far made three appearances for Leone Stars. His last played for Sierra Leone was against Ivory Coast in Abidjan in November 2014 in the 2015 Africa Cup of Nations (AFCON) qualifiers.

Sesay was invited for Leone Stars’ last 2017 AFCON qualifying game against Sudan in Freetown almost three weeks ago but didn’t play. It was the first time he stepped his feet on Sierra Leonean soil after 12 years.