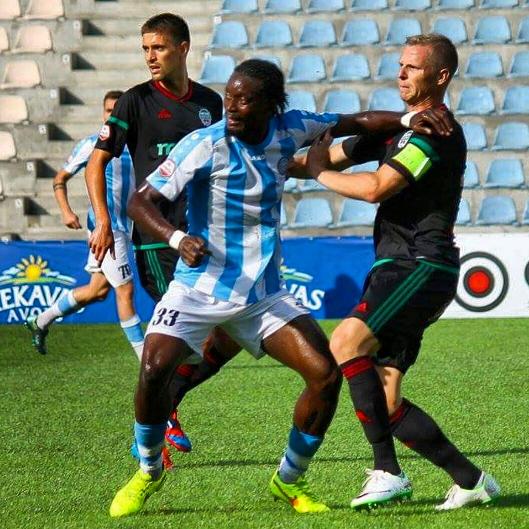 John Kamara impressive in Latvia
By Mohamed Fajah Barrie in Freetown
Sierra Leone’s John Bankole Kamara has been rated as the most effective player so far in this season’s Latvia top flight league.

The 28-year old midfielder who plays for Riga tops a statistical index released after the first round of the league ended two weeks ago.

A total of 165 players including Kamara playing in Virsliga were assessed as their effectiveness was determined by several factors including good passes and runs on the pitch.

Kamara was one of four players at Riga who played in all his side’s 14 matches in the first half of the league featuring for a total of 1,192 minutes.

The Sierra Leonean international who has played 10 times for Leone Stars says his effectiveness is due to hard work.

He told Sierra Leone Football.com that: “I’m effective because I’m putting a lot hard work in my game and I’m very much happy that I’m the most active player in the Latvia league.”

“It shows that I can do more and have many chances to play for the best teams in the league.

But Riga FC want me to help them play in Europe next season and I’m determined to give out my best to achieve the dream.”

I have played in all matches so far and I now look forward to our fixtures in the second half of the league.”

Riga host Ventspils on Sunday in their first match of the second round.

He started his professional football career with Lebanese club Al Tadamon Sour before moving to Greece where he first played Apollon Smirnis and then PAS Lamia.