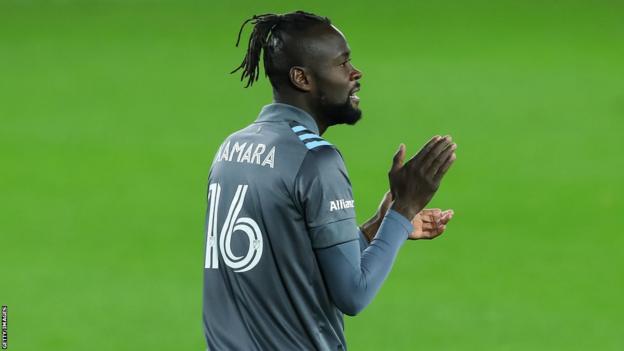 Sierra Leone striker Kei Kamara has come out of international retirement to re-join his country’s national team ahead of their upcoming 2021 Africa Cup of Nations qualifiers.

The Leone Stars will play Nigeria in Benin City on Friday and host the Super Eagles four days later in Freetown.

It comes a year ago after the former Norwich City and Middlesbrough player announced his international retirement on the eve of Sierra Leone’s opening 2021 qualifier against Lesotho in Freetown which ended 1-1.

Kamara. who now plays for MLS club Minnesota United in the United States, is one of 16 foreign-based players invited by Leone Stars coach John Keister.

“A year ago I made the decision to step away from our national team, and it was a decision I made with good intentions.” Kamara said in a statement.

“During this year of being on the outside watching and listening, I can tell you it has not been easy.

“In the past few months I have heard some wonderful conversations with newly appointed head coach John Keister about his vision for the national team, and they’re remarkable.

“I’m very honoured to be considered by Coach Keister as someone that could impact the team. To be included on the roster for the upcoming games is an invitation I have accepted.

“I’m very excited to wave the green, white and blue flag and will proudly represent my country. I’ll do what I have always done- play my heart out for mama Sierra Leone. I look forward to joining the team in the quest for qualification.”

Keister is delighted that Kamara has accepted to re-join the national team.

This is the second time Kamara, who is the fifth all-time leading goal scorer in MLS, has resumed his international career.

In October 2015, he took a break from the national team because he said Leone Stars players were not respected and treated fairly.

His decision last year was also because he unhappy with issues relating to the team.

Keister has also recalled three other notable players to his squad.

Former Bolton Wanderers midfielder Mohamed Kamara, who is currently with Finnish side FC HAKA and ex-AC Milan player Rodney Strasser, who also plays in Finland for TPS both return.

Also returning is Denmark-based Alhaji Kamara, who was diagnosed with heart problem after winning the Swedish league with IFK Notrkoping in 2015.

However the coach will have to do without his captain Umaru Bangura, who has recovered from Covid-19 which he contracted in Niamey before Sierra Leone’s last friendly match with Niger last month, he has been left out due to injury.