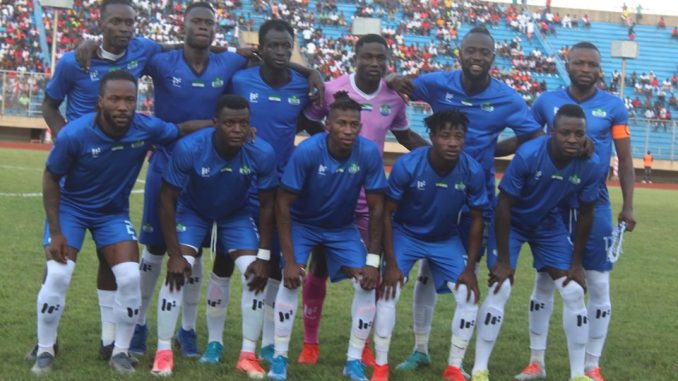 Solomon Zombo Moris
Guarded the goal well making superb one on one saves to keep the score line down. Apart from the third goal due to a mix up with the right back his overall performance was good. 7/10

Mustapha Dumbuya
Played well in the first half making forward runs putting in a couple of crosses for the strikers. Looked a bit jaded towards the end of the game and probably explains the blunder in the third goal. 5/10

Hassan Milla Sesay
Had a busy day at the office on the left flank defending and made some timely tackles in the first half. involved in the second penalty. 5/10

Ishmeal “Jaw Jaw” Koroma
Difficult day at centre back for the whole match. Struggled with aerial balls and was at fault for the first penalty. 4/10

Umaru Zengalay Bangura
Shaky start but took control as the game went on. Defended well throughout.7/10

John B Kamara
Tough tackles in midfield to break play and was also strong in the air. Got tired towards the end. 6/10

Abu “Diaby” Dumbuya
Tried to ochestrate play from midfield but picked up a yellow card very early in the first half. Covered the ground but couldn’t supply defence splitting passes for the strikers. 5/10

Kwame Quee
Played both on the right and left flank in between the game and scored the goal for Leone Stars. Overall performance was average. 6/10

Alimamy Y Azonto Bundu
Started well but went missing in the game. Struggled to show his pace in the game and made no impact on the game. 5/10

Kei Ansu Kamara
Not one of his best games for Sierra Leone. Battled up front with flicks and did alot of work helping out in midfield. 7/10

Musa N “Tombo” Kamara
Tried to get on the scoresheet but was mostly caught offside. Ran the channels but didn’t get enough supply from midfield. 5/10

Mohammed Buya Turay
Didn’t have enough time to show what he can do upfront. Lightning pace though. 5/10

Mustapha Bundu
Hardly touched the ball so could not make any impact. 4/10