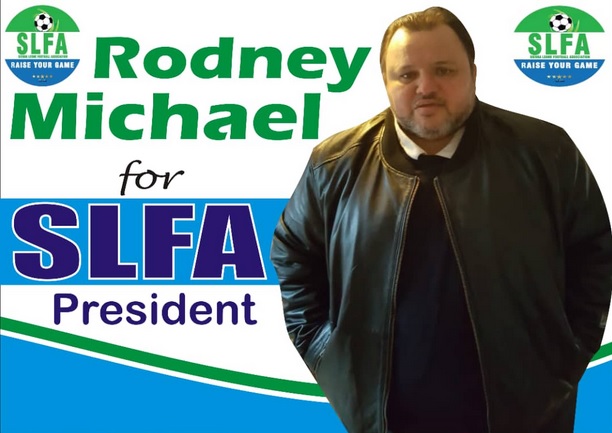 Members of the Football Association, Members of the media, brothers and sisters and fellow Sierra Leoneans all around the country and in the diaspora, it is with great pride that I have the opportunity once more to declare my candidacy for the SIERRA LEONE FOOTBALL ASSOCIATION PRESIDENCY. Thank you to the membership forum for the endorsement.

On the 3rd day of August 2013, our football and Nation was forced to accept a rigged electoral process, influenced by politics, marred by bribery and corruption, campaigned on racism, the manipulation carried out by our own brothers and sisters who were responsible to ensure fairness and a legitimate process.

The mandate of this President and her Executive has expired and they must no longer continue to assume the legitimacy to lead the association. They are on borrowed time…and it has extended for far too long and it is no longer acceptable. It must end now!

The membership has been very patient and tolerant in protesting against all the vices and the maladministration of this inefficient Executive and the disrespectful management of the Secretariat.

As the saying goes “too much of one thing is good for nothing” and the membership have spoken…they have today endorsed my candidacy and we are ready to take over the FA and restore sanity and respectability and the integrity of the association. We are not desperate for power, but we are desperate to restore constitutionality and legitimacy, and to end this dictatorship. SLFA is not a family inheritance nor is it any individual’s private property.

Under my leadership, we shall amend the statutes and remove the delegate status from organizations that should be respected for their independence, and as such the Heroes Foundation, the referees and coaches association will have their delegate status replaced with permanent executive positions, to be determined solely by their own members. They will no longer be taken advantaged of or compromised in exchange for votes.

The female members of our association, ignored and considered inferior, will also enjoy a permanent Executive position, and encouraged to administer their own leagues and development. They will enjoy relative autonomy and appreciable funding. Female football for female administrators and where possible, female coaches and female match officials.

Regions and District Associations will be funded and empowered to supervise and develop a youth policy and also to be responsible for the implementation of youth leagues from primary right through to secondary school level. They will supervise all Regional and District Leagues, and every chiefdom will be assigned a qualified class C coach to support the youth development project. No longer will Regions and Districts be a silent partner in the growth of the game, but rather will be delegated a major responsibility to manage the entire development within their localities.

All Regional and District Executive members and their Secretariats, will be allocated quarterly subsidy for their service, and encouraged to dedicate more time and energy to their responsibilities. Football will no longer be a charitable or voluntary service, but a responsibility for all elected officials across board, and the same will apply to all employees as well. There will be a considerable power shift from the headquarters at KIngtom to the Regional bodies as long as it relates to the management and development of the game specifically within their Regions.

The Premier League will be floated as a company by limited guarantee, owned by the Premier League Clubs and the Association, subsidized by the FA and Government, and encouraged to enter major sponsorship deals with corporate entities. The Premier League Board will be autonomous devoid of any interference from the Executive, except in forms of technical and administrative support they may require. The Premier League remains our prestigious competition and as such we must support it to attain the ultimate status within our country, a Premier Status.

The Female Leagues and all other leagues will be developed into regular National Leagues within a football calendar rather than on an ad hoc and irregular basis as is the current system. Every District will be encouraged and supported to have male, female and youth teams, to compete in the National Leagues, especially districts who are not currently in the Premier League.

We will ensure frequent courses in capacity building of administrators, match officials and coaches, ensuring all courses will be certified by Internationally recognized instructors, administrators or where possible academic institutions. It is only with capacity building can we ensure efficiency in Governance and management of the Association and all its structures.

For the last several decades, our association has lacked transparency and accountability, but I assure you that under my leadership, we will ensure best practice in the requisition, approval and expending of association funds. The generous support from FIFA and CAF, and all other revenues generated from TV Rights and other means, will be transparently utilized for the growth of the game, and not to enrich individuals. We will retain the services of a Global Marketing Firm to help us improve our marketing strategy, locally and internationally, and improve our revenue potential.

We will collaborate with the Ministry of Sports, the Ministry of Education, the National Sports Authority, the Parliamentary Sports Committee and all other key partners, to design initiatives and National Policies that would entice corporate sponsorship, improve grass root football and create a conducive atmosphere for our National Teams for all international matches.

We will foster a strong partnership with the media, and work to also build the capacity of sports reporters and journalists, and provide as much cooperation and support to the media houses, in exchange of promotion and advertisement of our football activities. The media is a significant support for any sporting entity.

Sierra Leoneans want a free and fair electoral process, and not of the kind we experienced in 2013. A process that will not further expand the divide and will not deepen the wound. The malpractice of 2013 has left scars yet uncured, and some of our own people have shied away from the football activities in shame and in regret.

We pray that this time, the independent committees remain neutral and reject any influence from the association or from external bodies. They have been mandated to supervise an electoral process independently, a process that will be respected for its credibility and appreciated for its fairness. A process that would help heal the scars of 2013 and ensure constitutionality and legitimacy for the newly elected Executive. May God help these bodies in the discharge of their obligations for the future of our Nations football lies in their hands and in the electoral process.

We are a Nation gifted with rich raw talents, blessed with a knowledgeable and passionate football public, who worship the beautiful game like they do their religion. This is a football Nation that deserves a President who understands and appreciates that, and who would work round the clock to appease them. Let their voice be the will of God.

Fellow Sierra Leoneans, no individual has the answers to all the issues, and therefore my Leadership will recognize and respect the role of every single person in the development of the game, irrespective of the Region or District you come from, or which candidate you support or do not support. I will be a President for all and not for a few, an accommodating President who would listen to all views and recommendations. I will work to bridge the gap and unite the family, and I will work to ensure we remain united forever, never to be divided and always respected. My leadership will be one of service and not one of dictatorship, one that is accountable for our stewardship and not one that bullies the membership, one that encourages the freedom of speech and not one that victimizes perceived opponents.

I will be the peoples President, The Nations President, the Best President for the Sierra Leone Football Association at this time.We will transform football for the better under the slogan “one game one family”!

My name is Rodney Edmond Michael, the second child of Mr Edmond Labib Michael, a revered Lawyer and Mrs Souad Michael, the most successful female tennis player ever in Sierra Leone, with two brothers, a wonderful wife from Gbambaya, Bonthe District, a proud father of two wonderful children, a son and a daughter, and born in Bo on the 23rd September 1972. I am a businessman with multiple business interests.

I have been a football administrator since 1996, having served as a member of the Bo District Football Association, and later Chairman for eight years from 2000 to 2008. I have served as Vice Chairman, Southern Region Football Association (2004- 2008) and Premier League Board Chairman 2010/11. A philanthropist whose contribution was extended to all 16 districts and 5 regions.

I hereby declare my intent to contest for the Sierra Leone Football Association Presidency and appeal to all football loving fans and all delegates to support my candidacy!