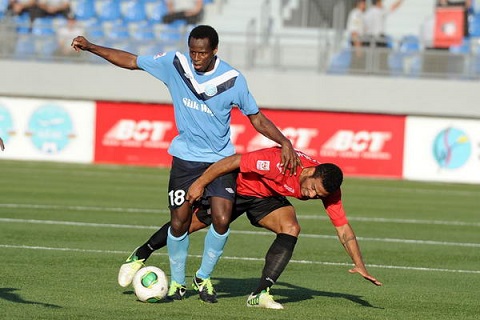 The 29-year old, who started his career with local club East End Lions underwent a knee surgery earlier in the year and was out for almost six months.

He’s currently without a club but he’s training with former club Syrianska who is playing in the Swedish second tier league.

“I’m training with Syrianska to try to keep myself fit again and i might play for them till the end of the season if i’m fully fit,” Barlay told Sierra Leone Football.com.

“It’s not easy when you’re out of football for like six months but I’ll try to do my best to be fully fit.”

“It was frustrating period for me. Thank God I have overcome it.”

“I’m really happy to be back on the pitch of play.”

All four players have denied the allegations. Barlay who has also played club football in Azerbaijan made lot of appearances for Leone Stars before he was suspended two years ago. He was the captain of the Sierra Stars team that represented Sierra Leone at both the 2003 FIFA and CAF U-17 Championships in Finland and Swaziland respectively.