Sullay Kaikai happy to be nominated for young player award 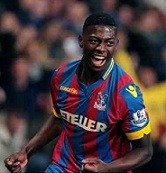 Crystal Palace striker Sullay Kaikai says he’s deligted to be nominated for the 2015 Sierra Leone Football.com/Globalkall Young Player of the year award ahead of the awards ceremony in London.

“It’s a happy moment for me to be nominated again,” the 20-year old told Sierra Leone Football.com in an exclusive interview.

He added: “It has been a good season for me and hopefully i’ll be able to win it.”

It’s the second time Kaikai is being nominated by selected Sierra Leonean sports journalists as he won 2014 young player award beating Arsenal’s Glen Kamara and Alie Sesay who was with Leceister City.

Kaikai is among five players shortlisted for the 2015 young player award.

Others are Sweden based Ishmail ‘Jorjoh’ Koroma, USA based Victor Mansaray, Issa Kallon who plays in The Netherlands and Glen Kamara still with Arsenal.

Viewers of Sierra Leone Football.com have already voted for both the best player and young player awards.

The winners will be annouced in a ceremony at Holiday Inn Hotel on Coram Street in London on Saturday starting at 7pm.

Kaikai made his Premier League debut for Crystal Palace last Sunday after he was recalled from League One side Schrewsbury Town where he scored a total of 12 goals in 26 games in two loan spells.