The Leone Stars That Made Pinnick Cry 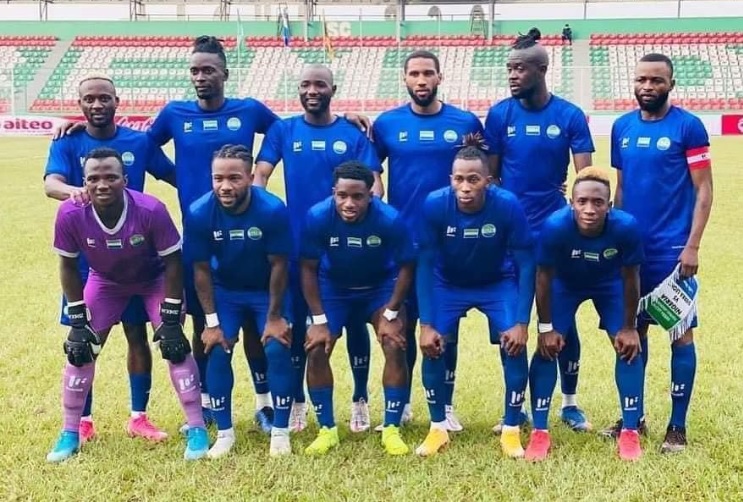 He started his professional career at FC Kallon in the Sierra Leone National First Division. At a young age, he had trials with Tippeligaen club Fredrikstad FK and Portland Timbers of Major League Soccer. Eventually he was signed by Swedish club Djurgårdens IF just after turning 18 years old.[1]

Kamara failed to make an impact at Djurgårdens IF, and instead enjoyed loan spells to IK Frej and IFK Värnamo. Before the 2014 season, he was signed by IFK Norrköping, where he positioned himself as a key player during his first season. On 31 March 2015, Kamara was loaned out to Malaysia’s Super League champion, Johor Darul Takzim FC (JDT) outfit from IFK Norrköping.[2]

However, the loan was cancelled in July 2015. He returned to Norrköping, and featured fourteen times as the team won the league.

Kamara signed for D.C. United on 11 May 2016. Kamara scored with his first touch in his debut for D.C. United just seconds after coming on against Sporting Kansas City at Children’s Mercy Park. His goal was the difference, as United went on to win the match 1–0.] During his time with United’s USL affiliate, the Richmond Kickers, he scored a hat-trick on May 27, 2017.

On 2 February 2018, Kamara signed for Sheriff Tiraspol. After one year in the club, he moved to Danish Superliga club Vendsyssel FF on 19 February 2019. On 15 May 2019 it was confirmed, that Kamara would join Randers FC for the 2019–20 season on a free transfer.

In February 2016, it was reported that Kamara has a potential cardio issue that could have eliminated him from professional play. Kamara was effectively put on an indefinite restrain from playing football. Kamara was evaluated by MLS Cardiologist Consultant Matthew Martinez of Allerton PA who is a specialist at MedStar Georgetown University Hospital. Through rigorous testing, Kamara was found that it was not the case that his condition could cause concern, and he was cleared to continue in his professional career with full medical clearance and it was announced that Kamara intended to continue his career in Major League Soccer club D.C. United where he would be allowed to play, with the understanding that he would undergo tests for preventative measures at the end of each season.

Alhaji Kamara was a second half substitute and scored 2 goals carrying on the tide that was turning against the Super Eagles from the late 1st half goal by Kwame Quee. The energy speed and force Alhaji Kamara brought to the side wore down a Nigerian defence that could not cope. Alhaji Kamara contributed a stupendous headed goal from a left wing cross and another from a scrambled header in the final minutes.

Kwame Quee (born 7 September 1996) is a Sierra Leonean footballer who plays as a midfielder for Víkingur Reykjavík, on loan from Breiðablik, as well as the Sierra Leone national team.

In June 2016, Quee underwent a three-week trial with Danish side Randers FC, along with three other teammates from Johansen.

In May 2017, Quee was loaned out to Icelandic club Víkingur Ólafsvík on a two-year deal. He made his debut on 15 May against Grindavík, although he was sent off in the 82nd minute after seeing his second yellow card of the match. His first goal with Víkingur came in his third game, where he flicked in a header from close range against Breiðablik. He scored his second goal the following month, during a 2-1 win against Stjarnan.

In January 2019 Quee signed for Icelandic top flight club Breiðablik. After just two appearances with the club, he was loaned out to Víkingur Reykjavík in June. He won the 2019 Icelandic Cup with Víkingur.

Quee received his first senior call-up to the national team in July 2014 in preparation for the 2015 Africa Cup of Nations qualifiers. On 19 July, he earned his first cap, replacing Mohamed Kamanor during a 2–0 win against Seychelles, which secured them a spot in the group stage.

After Leone Stars were completely outclassed in the first 30 minutes Kwame Quee started the revival scoring the 1st of what was to be an amazing comeback in the 41st minute latching on to a pass into the penalty area and smashing home nut-megging the keeper, exposing the soft underbelly of this Nigerian side.

Mustapha Bundu (born 27 February 1997) is a Sierra Leonean professional footballer who plays as a forward for Anderlecht and the Sierra Leonean national team.

Born in Freetown, Bundu started playing youth football for the Craig Bellamy Academy before moving to the United Kingdom to play for Hartpury College. He then went on to appear for lower league sides Newquay and Hereford. In 2016, Bundu signed for Danish Superliga club AGF after a successful trial. After growing out to become an important piece for the first team, he transferred to Anderlecht in 2020.

After multiple call-ups for the Sierra Leone national team, Bundu made his international debut on 4 September 2019 in a game against Liberia.

The native of Freetown, Sierra Leone, spent his youth football playing in the Craig Bellamy Academy before obtaining a student visa to study at Hartpury College to further pursue his football career.

He graduated from Hartpury College in 2016, scoring 18 goals in six outings in the English Schools’ FA Cup.

Bundu spent a season at Hereford, winning three trophies and reaching the FA Vase final in 2016. Work authorisation restrictions only allowed him to ply his trade in a club no higher than the fifth tier in the English football league system which forced him to leave Hereford.

When visiting a friend, he featured for Newquay once, netting two goals in less than thirty minutes as a substitute. Then coach Sash Wheatman acclaimed him as “the best player he’s had the privilege of watching at this level of football”, adding “it was like bringing on Ronaldo on or Gareth Bale – he was streets ahead”.

Bundu went on a trial with Danish Superliga club AGF in early August 2016.[6] After a successful trial, he signed a contract with the club on 31 August 2016.

In an away defeat to Brøndby IF, he made his Superliga debut as a substitute on 23 October 2016. He came on the pitch in the 78th minute, replacing Martin Spelmann. In December 2016, Bundu extended his contract until 2021

Bundu had his breakout season in 2019–20, scoring eight goals in the first 20 league matches of the season. He finished the season with 10 goals in 30 total appearances, as he helped AGF finish in third place in the Superliga-table; the club’s first top-three finish in 23 years.

On 7 August 2020, Bundu joined Belgian club Anderlecht for an undisclosed fee, believed to be between DKK 25–30 million – making him the most expensive sale in the history of AGF]He signed a four-year contract with Anderlecht.

Bundu received his first international call-up in August 2018, being a member of a preliminary squad.However, he did not make the final 23-man squad. He made his debut in a 3–1 World Cup qualifying loss to Liberia on 4 September 2019

Bundu came on in the second half and scored arguably the best Leone Stars goal of the match. Some good possession in midfield, a decent pass from the left, trapped by the right foot and a thunderbolt left footed shot leaving the hapless keeper no chance. Leone Stars had recovered 3 goals and were on their way unwaveringly to a 4th.