Zingalay Bangura delighted to be shortlisted for best player award 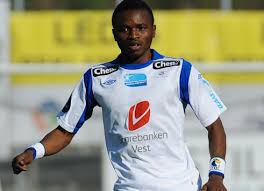 “I’m happy that I’ve been nominated for the prestigious award which is really inspiring,” the Belarus Bangura told Sierra Leone Football.com.

The 28-year old is one of five players nominated for the award by selected Sierra Leonean sports journalists.

The others are Sweden based Alhaji ‘Andriano’ Kamara, Kei Ansu Kamara of Columns Crew in USA, Scotland based Mustapha Dumbuya and Mohamed ‘Poborsky’ Bangura who moved to China last month.

Viewers of the Sierra Leone Football.com are voting for the best player and voting ends on January 31, 2016.

The winner will be made known in an award ceremony in London on May 21.

Bangura who won the award in 2013 has called on voters to vote the player that deserve to win the award.

He said: “I know all of us have done well but I call on the voters to access us well and vote for the player that deserve to win.”

“I have now made the shortlist four years in a row and I’m grateful.”